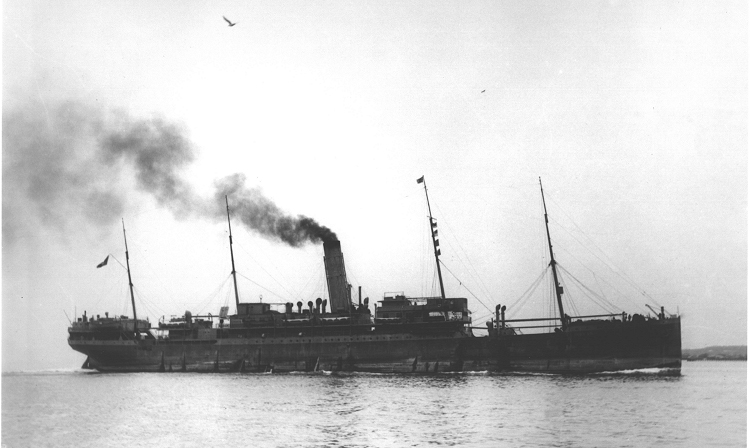 The Zamzam was built by Harland and Wolff of Belfast in 1909 as a passenger ship for the Bibby Line and dubbed the SS Leicestershire. She was a steam ship that weighed 8299 gross tons (grt) and measured 467.2 feet in length x 54.3 foot beam length x 31.8 feet deep (or 142.4 x 16.6 x 9.7 meters). Her top speed was 14 knots. She was characterized by one funnel, four masts, and a twin screw. The four masts were her most distinctive feature. She was commanded by Captain William Gray Smith and Chief Engineer John Burns in 1941, both Scotsmen who had previously served in the British Navy during WWI.

By 1917, during World War I, she was enlisted as a British troop carrier. In 1933, she was bought by the Egyptians by the Alexandria Steam Navigation Company, Red Rose Line, and renamed the Zamzam in honor of the sacred Mohammedan well near Mecca, and for the next eight years she was based out of Alexandria, Egypt, and quietly transported pilgrims from all over the world.. A mosque was built in one of her cargo holds, and she could accommodate up to 600 religious pilgrims on their way from the Suez to Mecca. She even transported passengers to attend the coronation of British King George VI on May 12, 1937, where German Kapitän zur See Bernhard Rogge admired her and other ships decked out for the occasion. In 1941 to maintain its cash flow during World War II as the Mediterranean Sea became a warzone and Rommel’s North African Campaign was in full swing, the Zamzam started taking on other types of passengers. Its last voyage was to transport passengers from North America across the Atlantic to various South American and African ports. Its planned route was from New York to Africa, with stops in Baltimore, Trinidad, Recife, Capte Town, Mombasa, and finally through the Suez Canal to its home base of Alexandria. See the Ship Routes and Timelines webpage for more information. 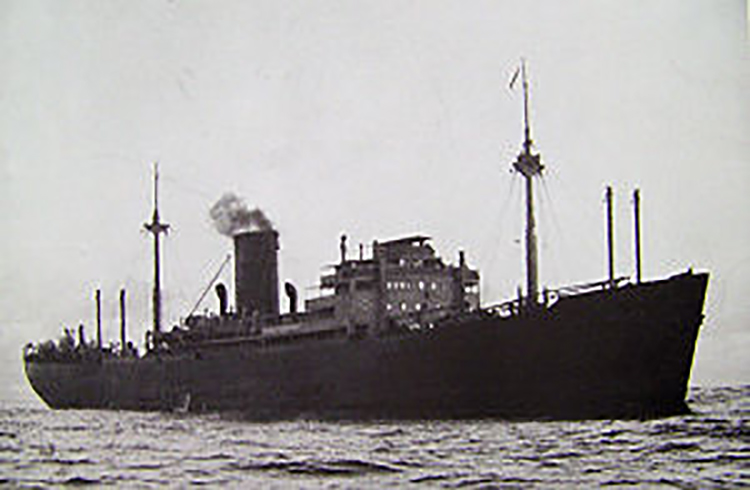 The Atlantis was an auxiliary cruiser (HSK-2), also known as a merchant raider, and was refurbished from the freighter Goldenfels in 1939 in support of the war. Captain Bernhard Rogge was in charge of refitting her, which included hand picked materials for disguises as well as a specific crew. For WWII, she was designated Schiff 16 (Ship 16) within the Kriegsmarine or German Navy. She launched officially from Bremen-Vegesack, Germany to the North Sea on December 12, 1939. She displaced 17,300 long tons and measured She had a crew of 349 (21 officers and 328 enlisted sailors) and the Captain’s Scottish terrier, “Ferry”, as a mascot. Atlantis was powered by two 6-cylinder diesel engines that allowed her to drift to conserve fuel, and were powered a single propeller. Her top speed was 17.5 knots with a range of 60,000 miles (97,000 km) at 10 knots. She measured 508.53 x 61.3 x 28.5 feet (155 m x 18.7 m x 8.7 m).

The ship was equipped with six 150 mm (5.9 in) guns, one 75 mm (3.0 in) gun on the bow, two twin-37 mm anti-aircraft guns and four 20 mm automatic cannons; all of these were hidden, mostly behind pivotable false deck or side structures. A phony crane and deckhouse on the aft section hid two of the 150 mm (5.9 in) guns; the other four guns were concealed via flaps in the side that were raised when action was imminent. Atlantis also had four waterline torpedo tubes, and a 92-mine compartment. This gave her the fire power, and more importantly the fire control, of a light cruiser. The ship also carried two Heinkel He-114C seaplanes in one of its holds, one of these was fully assembled and the other one was packed away in crates. The Heinkel was later replaced at sea with the smaller and faster Arado Ar 196. The Atlantis still holds the record for having travelled more than 161,000 km (100,000 mi) in 602 days (some accounts say 622 days), and sank or captured 22 ships totaling 144,384 tons (142,104 long tons).  Either German supply ships, such as the Dresden, provided materials or the Atlantis would raid an enemy ship for its goods, food, weapons, and ship logs and papers prior to sinking them or taking ships intact as prizes for The Third Reich. The raider therefore avoided contact with other ships in port, staying hidden at sea. Captain Bernhard Rogge knew his resources well and used remote islands to obtain fresh water, food, and building materials as needed. The islands of the South Atlantic provided rest and recreation for the crew, as well as providing a hidden port to make repairs or change disguises.

On October 18, 1941, Captain Rogge was ordered to rendezvous with the submarine U-68 800 km (500 mi) south of St. Helena and refuel her, then to refuel U-126 at a location north of Ascension Island in the South Atlantic. Atlantis rendezvoused with U-68 on 13 November, and on 21 or 22 November, 1941, with U-126. The OKM (German Naval High Command) signal instruction sent to U-126 ordering this rendezvous was intercepted and deciphered by the Allied Enigma code breakers at Bletchley Park and was passed on to the British Admiralty.  The British new the Atlantis as Raider C and the Rattlesnake of the Seas.

While completing a mission off the coast of Madagascar, the HMS Devonshire received a suspicious message which was confirmed to be falsely sent by the SS Polythemus. The message had indeed been sent by the Atlantis as a ruse to throw off the British ship. After confirming with the commander in chief of the Combined Fleet that the message could not have come from the SS Polythemus, the Devonshire was alerted to raiders in the area and order to track the Atlantis, attacking and partially sinking it while the Atlantis was in the process of refueling with the German submarine, U-Boat 126 (U-126). Upon detecting U-126, the Devonshire retreated and Capt. Bernhard Rogge scuttled his own doomed ship so that it would escape enemy capture on November 22, 1941, at  04:12S;18:42W.  Eight crewmen were killed by the Devonshire attack, the most losses Rogge was ever suffer of any of his crews.  While that was the end of the Atlantis, it was not all that was in store for her crew and a Zamzam prisoner.

U-126 took the lifeboats from Atlantis in tow until the German supply ship Python could take the crew and Zamzam prisoner Frank Vicovari (an ambulance man who was still in sick bay) on board. On December 1, 1941, the Python was in turn located by the British cruiser HMS Dorsetshire and again Atlantis’ crew had to head for the lifeboats, and again they were taken in tow, heading north. Their escape route passed by the Cape Verde where Italian submarines, including the Luigi Torelli, took on some of the crew. They also passed by the Canary Islands (Spain), which had been considered earlier that month as a possible landing port for the Zamzam prisoners but was shelved in favor of an occupied territory. After having been towed more than 5000 miles Rogge and the last of his crew finally reached occupied France at Grand Port de Maritime Nantes Saint-Nazaire on December 29, 1941. See the Ship Routes and Timelines webpage for more information. 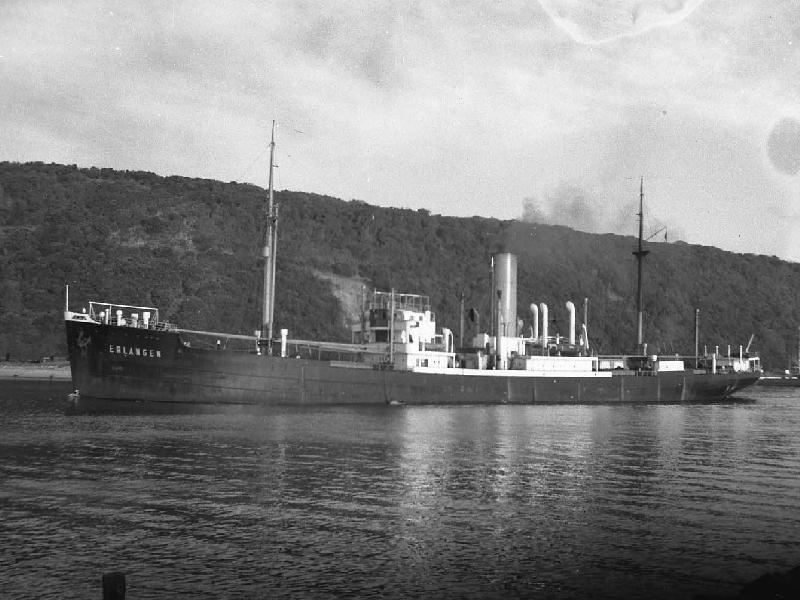 The Dresden (Schiff 171) was a blockade runner that served as a supply ship in both the Pacific and Atlantic Oceans. She also served as necessary as a prison ship when other ships (e.g., the Atlantis) unloaded POWs for transport to occupied countries. She carried mail and confiscated papers from sunken or captured ships which were used in the war effort against the British. She weighed 5567 tons and had a top speed of 15 knots. She was commanded by Captain Walter Jaeger (also Jäger) and Chief Engineer Helmut Vitke.  In 1941, the Dresden sailed the breadth and width of the Atlatnic Ocean, often obtaining goods from Brazil, Chile, Argentina, or islands and territories owned by these South American countries. Its route zigzagged back and forth in the South Atlantic Ocean from 1939 to 1945, meeting with its target ships at predesignated locations far from the main shipping lanes (e.g., along the Brazilian coast) or areas of heavy activity with the British Blockade. The ship supported multiple German battleships and raiders, including the raider Atlantis and its sister raider the Pinguin.  The Dresden rendezvoused with the Atlantis for resupplying and the transfer of the Zamzam prisoners from April to May 1941. Eventualy, the Dresden transported the Zamzam prisoners north to occupied France at St. Jean de Luz, where the Zamzamers disembarked and were taken prisoner by the Gestapo. The Dresden would undergo repairs and be sent back out to the Atlantic to continue providing supply services for the German Navy.

The Dresden struck a mine on November 6, 1942, while on her way down the Gironde. She was scuttled soon after her return during the Allied run Operation Frankton (Cockleshell Heroes) on 11-12 December 1942. See the Ship Routes and Timelines webpage for more information. 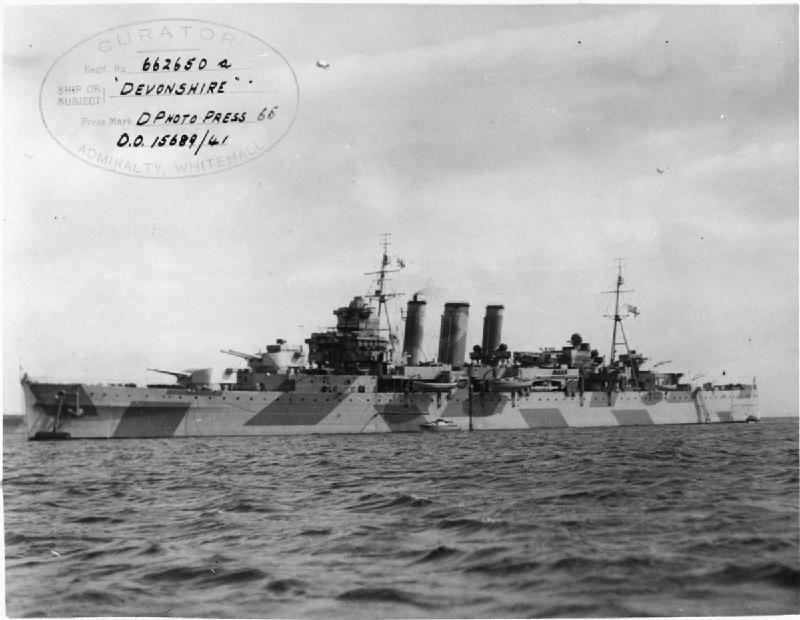 The Devonshire was active in providing escort and protection services for ships in the British Fleet. This included providing coverage for convoys to/from the Soviet Union and to Africa. During 1941 as part of the British Blockade effort, she sailed the full length of the Atlantic Ocean, from the farthest north (and beyond to the Norwegian and North Seas) to the farthest south.   She also aided in hunting down the German raiders Kormoran (HSK-8, Ship 41) and Atlantis (HSK-2, Ship 16) during operations in the South Atlantic.  On November 21, 1941, using the picture of the Atlantis in the Tamesis disguise from the Life Magazine article (issued June 23, 1941), she sank the famed German merchant raider Atlantis, killing seven German sailors.  It was the only ship she sunk during the war. See the Ship Routes and Timelines webpage for more information.